Some of the finest memories, stories and imagery from the eighteen rounds of the FIM Motocross World Championship 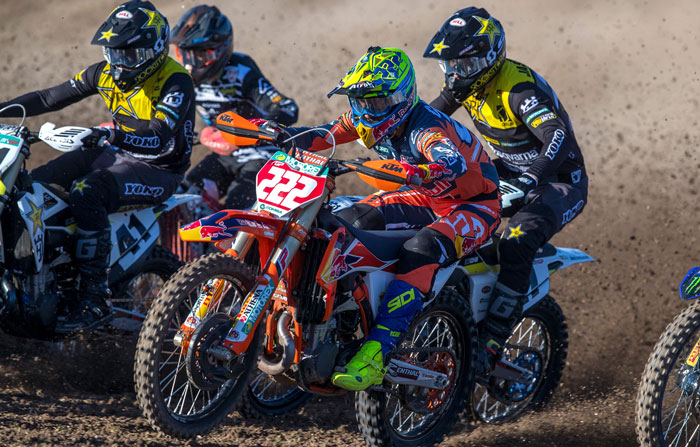 Still leading the way
Tony Cairoli, MXGP of Great Britain, Matterley Basin, March 24th
The sun shines down on Tony Cairoli as the Red Bull KTM Factory Racing rider and MXGP world championship leader powers along the long start straight at Matterley Basin and the British Grand Prix. This was round two of 2019, the first in Europe, and at a venue where many were wary of the March date and the notoriously unreliable UK weather. The weekend turned out to be dry and Cairoli would triumph in England for the second of four victories in the first five races. The Sicilian was victorious several weeks previously at the opening fixture in Argentina – a personally satisfying success considering how narrowly he was defeated by teammate Jeffrey Herlings at the same circuit in 2018 – but Matterley showed that, even at 33 years of age, Cairoli was still the reference for the premier class. After this photo Cairoli would total another four successive podium results and then a crash in qualification for the Grand Prix of Russia followed by another season-ending fall shortly after in Latvia would sadly curtail #222’s ambitions for a tenth world title. 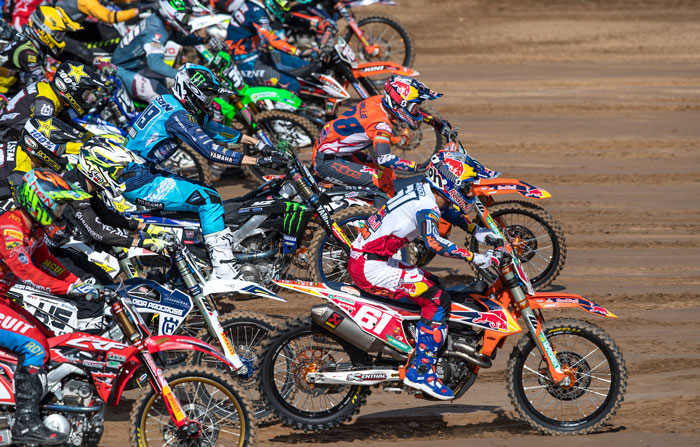 Happy Holeshots
Red Bull KTM MX2 duo! MXGP of Czech Republic, Loket, July 28th
In the MX2 class the sights of the two Red Bull KTM 250 SX-Fs of Jorge Prado and Tom Vialle leading the pack around the first turn were frequent throughout a series that started in South America and finished in Asia. Across eighteen Grands Prix the two eighteen year olds were proficient and scarily unbeatable out from the gate (as neatly displayed in the second image at Kegums in Latvia which shows the advantage they enjoyed away from the line). Incredibly, from a grand total of 36 moto starts the Spaniard and Frenchman owned 30: an essential ingredient in the combined tally of 17 Grand Prix wins between both of them and 31 moto checkered flags for Prado. The photograph here is the unmistakable first turn from Loket and the Grand Prix of Czech Republic. 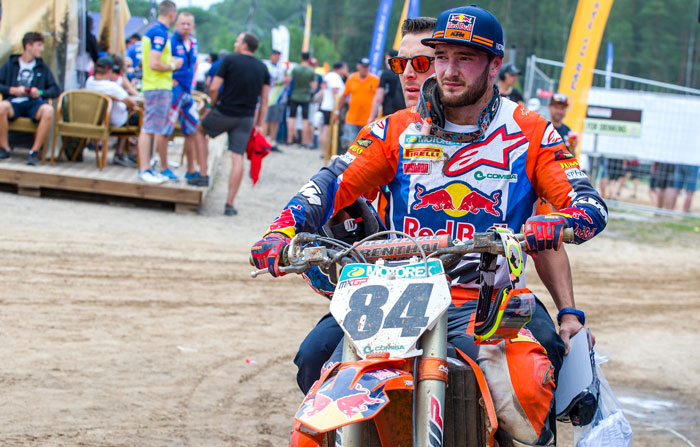 A brief reply
Jeffrey Herlings, MXGP of Latvia, Kegums, June 16th
A torn expression on the face of the defending MXGP World Champion Jeffrey Herlings here at Kegums in Latvia. This is lockeround nine in June. The Dutchman has returned to Grand Prix duty a few weeks after riding and building pace from what was a three month convalescence due to a badly broken right foot: courtesy of a pre-season training accident. The soft and sandy Kegums circuit had been the scene of Herlings’ first win with the KTM 450 SX-F in 2017 and amazingly the champion claimed victory in his very first MXGP moto of the year. The slight grimace hides the truth. Herlings had suffered a small fall on the sighting lap of the race and his right foot had been hit by the unsuspecting Arminas Jasikonis. Herlings had lined up and another fracture in the same area as the previous injury would mean another operation and another frustrating period on the sidelines. 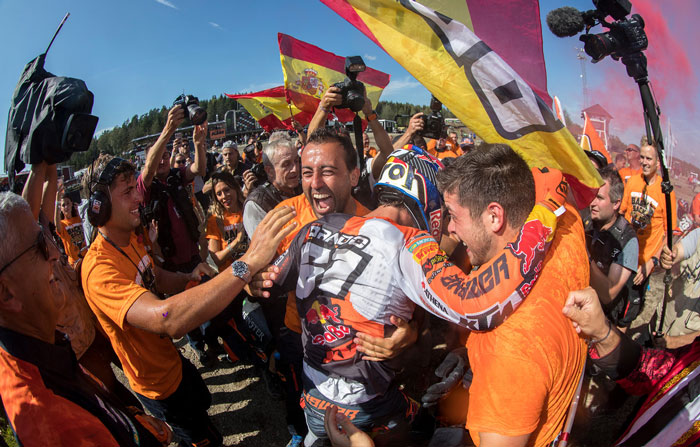 That’s two: and goodbye MX2
Jorge Prado, MXGP of Sweden, August 25th
Jorge Prado is swamped after the first moto at Uddevalla for the Grand Prix of Sweden and upon confirmation of his second MX2 world title (KTM’s third back-to-back MX2 championship winner since 2009). There were still two Grands Prix to go after the trip to Scandinavia. 2019 was a tale of utter domination for the talented Spaniard: 16 GP victories from 17 appearances, 14 qualification heats, 31 motos from 34. Prado’s decimation of the MX2 class ironically casts him out of the division according to FIM rules as a double winner. He would make his debut on the KTM 450 SX-F at the Motocross of Nations over a month after this photograph and is now due to form the greatest Grand Prix line-up of all time for 2020 MXGP alongside Cairoli and Herlings: fifteen world championships under one awning. 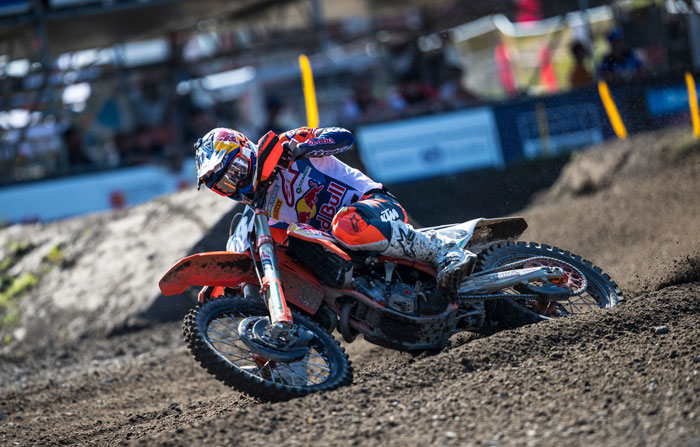 Behold the rookie
Tom Vialle, MXGP of Sweden, August 25th
While Red Bull KTM uncorked the champagne at Uddevalla for Prado there was also big celebrations for Tom Vialle. The French rookie is hard on the gas here, coming out of the pit lane chicane and on the way to a 2-2 scorecard that would give him the overall Grand Prix and disrupt Prado’s successive streak of spoils. Sweden would be the only time that Prado stood on a Grand Prix podium away from the top step. For Vialle, this was the peak of an astonishing rookie season that delivered seven podiums and 4th place in the world. 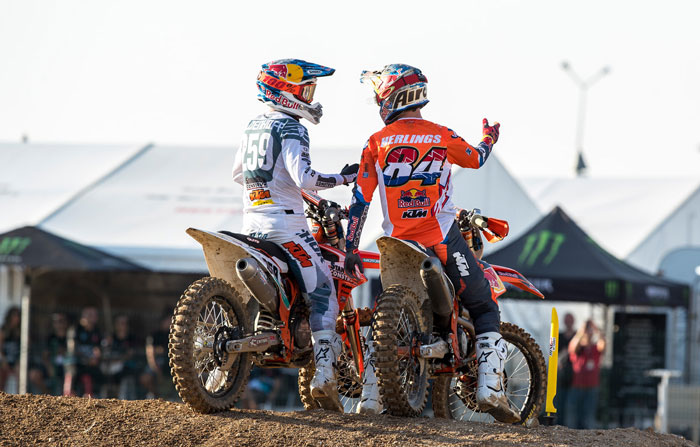 Remember me?
Jeffrey Herlings & Glenn Coldenhoff, MXGP of Turkey, Afyon,quali September 8th
Jeffrey Herlings swaps congratulations with countryman and fellow KTM rider Glenn Coldenhoff at the climax of the Grand Prix of Turkey and the penultimate round of MXGP 2019. Herlings made his second comeback of the campaign and dramatically caught and passed the in-form Coldenhoff in the second moto to toast his first victory (the 85th of his career) of the year. It was an emotional moment for the sensitive champion who had watched from the sofa as Tim Gajser lifted the 2019 crown three races previously in Italy. Herlings, still not 100% race fit here in Afyon, would also tussle and defeat Coldenhoff a week later in China to end the season with his tail up. For his part, Standing Construct KTM’s Coldenhoff embarked on a career-high run of two wins and five podiums in the last five events of 2019 and would then dazzle the Motocross of Nations for the second year in a row.