73 years of history only adds to the prestige of the Motocross of Nations, the oldest and only closed circuit team race in the world that generates an atmosphere unlike anything else in motorsports. 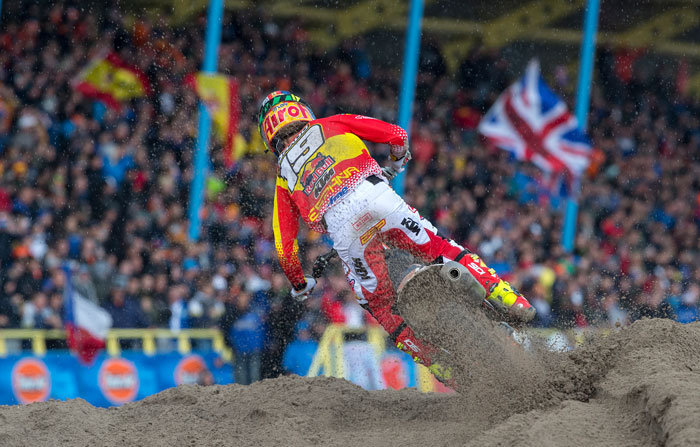 At Assen, the Geert Timmer grandstand runs from the exit of the Ramshoek curve, all the way along the pit straight and along to the first corner. It houses a major chunk of the 60,000-seating capacity at the famous racetrack.

At the 2019 Motocross of Nations, well over half of the tribune is full. Half of that crowd is getting wet. The rain is pouring down at one of Europe’s oldest motorsport facilities, but it is apt that the Motocross of Nations is taking place at the Drenthe venue. The Netherlands hosted the very first MXoN (then carrying the title “Motocross des Nations”) back in 1947. Assen is the definition of a modern motocross circuit: a temporary course chiseled from thousands of tons of imported sand and making full use of the permanent infrastructure like the paddock, VIP lounges, Media Center and more. It has been the home of the Dutch Grand Prix on the MXGP calendar since 2015, but the MXoN is a different animal altogether. 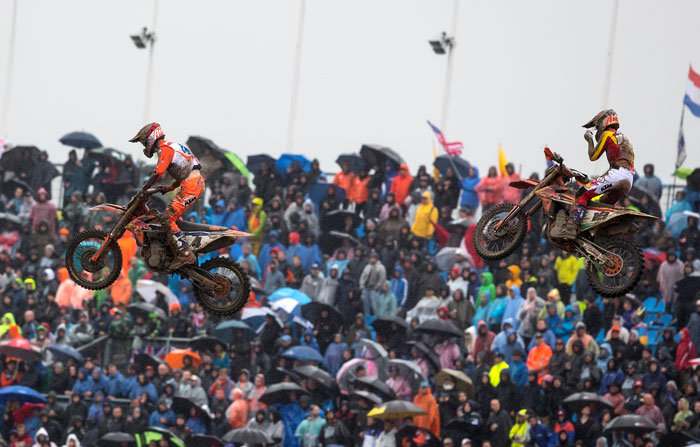 There is a reason – several actually – why this particular race is a firm date in the agenda for many, and that’s not a presumption; you only have to look at the flags, costumes and special effort made by patriotic supporters to surmise that this annual fixture has been eagerly anticipated. People are drawn to the MXoN for the unique appeal that it provides. There is nothing like it. Motorsports fans are typical drawn to a particular rider/driver or a brand, but the MXoN is all about pride in the flag and the prospect of watching the three best athletes (two on 450s and one on a 250) selected by their country to compete as a team towards the singular goal.

The three motos, five scores (the worst is dropped) and the inverted scoring system (1 point for 1st and all the way down to 40 for a DNF) mean a convoluted feeling of ‘what is going on?’ In the final laps of the last moto the implications of an ever-changing race order also bounce around in terms of the ultimate podium positions: the classification is undecided and often unknown by the spectators right up until all the riders have crossed the finish line. It means an overall comprehension of the event is daunting, but it’s not why the majority of the crowd is there. As much as there is competition and bragging rights at stake on the track there is also fierce support and rivalry at the fences: British fans bellow for the Brits, French fans go wild for the French, the Latvians wave flags for the Latvians, the Dutch roar and light flares for the Dutch. And so on. The opportunity to enjoy and display some national pride in a sport that doesn’t involve a ball spills into fun with eccentric costumes and paint. There is a carnival feel at times, almost like a music festival. It is like the FIFA World Cup but with all the teams together and squashed into one day. The media attendance rivals any MotoGP™ event for interest and the industry presence is rarely as high for any dirt bike meeting. 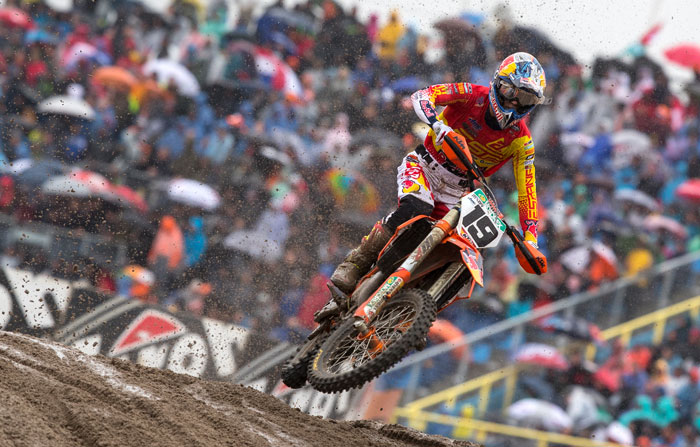 Back on the sand and breaking the format of the Nations down further reveals more novelties: the sight of 250s racing against 450s (and it is not unusual for a 250 to win), the strategy of which rider takes the better start slot (1-20 for the first athletes and then 20-40 for the second), seeing ‘obscure’ motocross territories like Cyprus and China trying to compete and the sheer depth of the entry list. A country like Slovenia might boast the MXGP World Champion in their ranks but their combined strength is far less compared to nations with a competitive and renowned trio. The same case applied to Spain with Red Bull KTM Factory Racing’s Jorge Prado making his first outing on a KTM 450 SX-F at Assen.

The fever of the MXoN is usually hottest around the “home nation”.

At Assen the timing was right for Team Netherlands. Starring Red Bull KTM Factory Racing’s Jeffrey Herlings, the 2018 MXGP World Champion and one of the fastest motocross riders in the world, and Standing Construct KTM’s Glenn Coldenhoff among the three, the Dutch have finished as runner-up for the past three years. They had been trying to dislodge the hegemony of Team France and a streak that had existed for five editions and since Latvia in 2014. 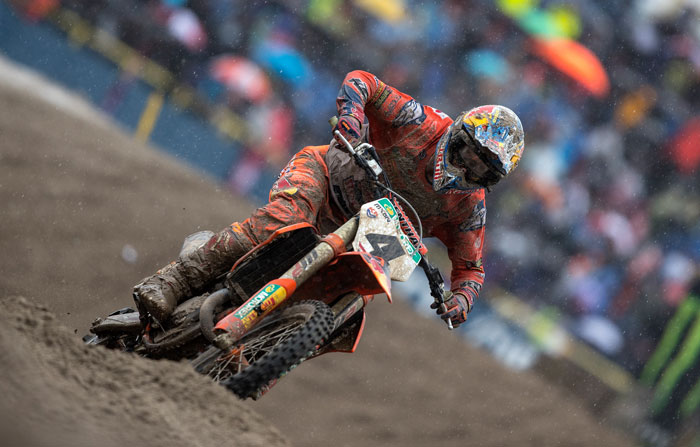 Amazingly the orange crew had never won and the last time the Nations had visited the Netherlands was in 2004. The MXoN has been hosted by France, Great Britain, USA, Italy, Belgium, Germany and Latvia since that day in Lierop.

Herlings and his KTM 450 SX-F have a good fit with Assen. Thirteen months earlier he had won the Grand Prix and celebrated his first premier class world title (the fourth crown of his career) in front of the adoring masses. He has also won in the MX2 category across the white sand. Coldenhoff as well knows the feeling of top-three speed around the terrain. Both KTM riders came into the traditional season curtain-closer in peak form: Herlings had won the last two MXGPs of the in Turkey and China to ease the pain of an injury-hit 2019 while Coldenhoff had arrived to a career-high with five podiums and two victories in the last five rounds. Together with MX2 racer Calvin Vlaanderen they were heavy favorites, even in spite of the disagreeable weather that gave other nations hope that mistakes and an upset to the rulebook was more of a possibility. 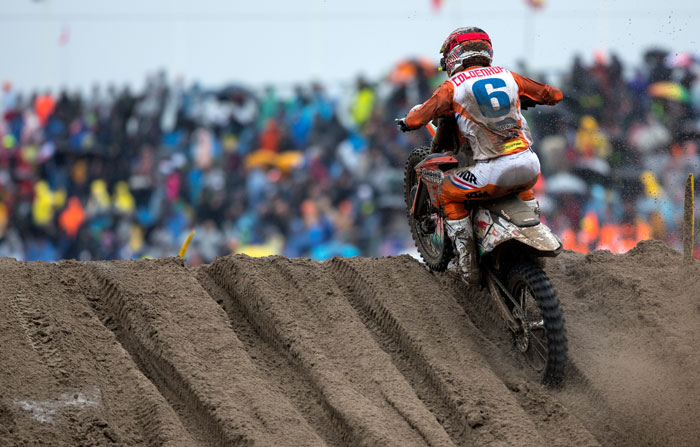 Together with his KTM 450 SX-F, Coldenhoff would become the second rider ever to win two motos two years in arrow (he excelled the previous summer at RedBud in the USA) after former Red Bull KTM Factory Racing teammate Tony Cairoli who managed the feat in 2012 and 2013 with the 350 SX-F. #259 was the star performer but Herlings’ first outing in Race1 was the action bright spot of a dark and cloud-lined day. The 25 year old pushed all the way through the field and only just failed to beat Slovenia’s Tim Gajser by less than a second. His progress animated the Dutch public even more and with Coldenhoff’s breakaway in the second race (and Vlaanderen’s efforts on the 250 to 10-10) the Netherlands had a large buffer before the decisive last gate drop.

“Going into the last moto we knew only one of us had to finish,” said Herlings afterwards. “When I saw Glenn up front I thought ‘that’s good’. It takes some pressure away when you can line-up with two other guys that are capable of winning their class. We expected – well, I don’t want to sound too confident – to go for the win but it still all had to fall together. We still had to pull it off, and I never had one second of doubt in both of those guys. We’ve been training a lot in the last few weeks and we’ve been pretty fast. I knew we had a big chance of winning.” 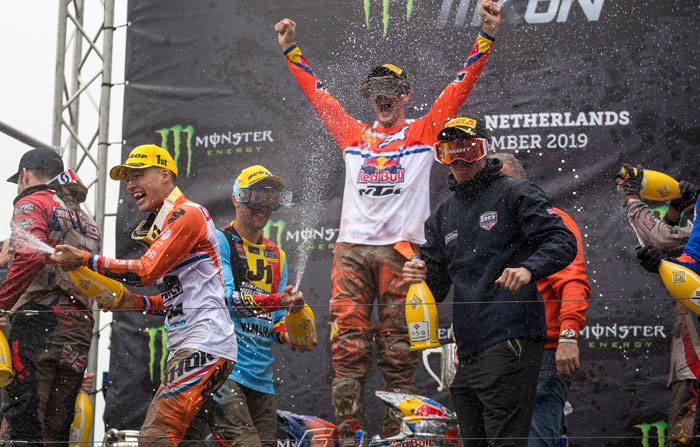 “These guys are individual sportsmen, great sportsmen, but they function very well as a team,” assessed Team Manager Patrice Assendelft. “This weekend anything could happen because of the weather. It was like a gamble before we started the weekend but they did so well. It means a lot. I promise you, we’re not going to wait another 70 years or something!”

“It was very tough with those conditions but I’m glad we made it. Of course the goal was to win. We would definitely be disappointed with something less. I won the races in RedBud last year but this one was definitely nicer because of the home crowd.” 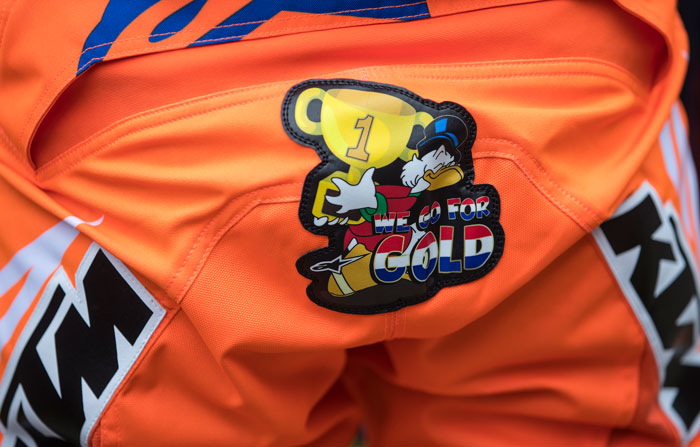 Herlings has now tasted two kinds of professional glory at Assen: the selfish and the selfless. For an individual who insatiably feasts and feeds on victory the MXoN delivered an odd sensation. #84 claimed he was “very not satisfied” with his scores of 2-4 but “we’re really here for is to win as a nation, and that’s what we did.” And the main difference between celebrating a MXGP World Championship and an MXoN win? “About fifteen degrees and the sunshine!” he joked.

Back in 1947 Great Britain were the first winners of the competition. It was fitting that the trio of Adam Sterry, Red Bull KTM Enduro rider Nathan Watson (the ex-MXGP ace was drafted in late as a replacement) and KTM rider Shaun Simpson (victor of the first Dutch GP at Assen in 2015) were able to profit from a technical problem for the French on the last lap and take the final podium spot behind the Dutch and then the Belgians. The relentless showers may have continued right through the event program but the drama did not wash away as Gautier Paulin’s bike rolled to a halt. For the outgoing champions the next twelve months cannot pass quickly enough. The Ernee circuit in northern France will be the next destination for this enduring contest and this time it will be the Dutch wearing those prized 1, 2, 3 number plates.